Carnegie Corporation of New York has chosen Independence Day, July 4th, to honor distinguished immigrants for their contributions to advancing American society. This year 41 honorees from more than two dozen countries are named as leaders in a range of fields. These naturalized citizens have changed the face of America.

The site states that “Dr. Gholam Peyman, born in 1937, in Shiraz, Iran, is an ophthalmologist and retina surgeon who, over his four-decade career, has been granted approximately 150 U.S.patents for his work advancing his field. He is best known for his invention of the revolutionary LASIK eye surgery, which corrects patients’ vision. He was voted into the Hall of Fame of Ophthalmology in 2005 and he was awarded the National Medal of Technology and Innovation, in 2013.”

To learn more about this prestigious honor and it’s 41 2014 recipients visit: Great Immigrants: The Pride of America website: http://greatimmigrants.carnegie.org/ 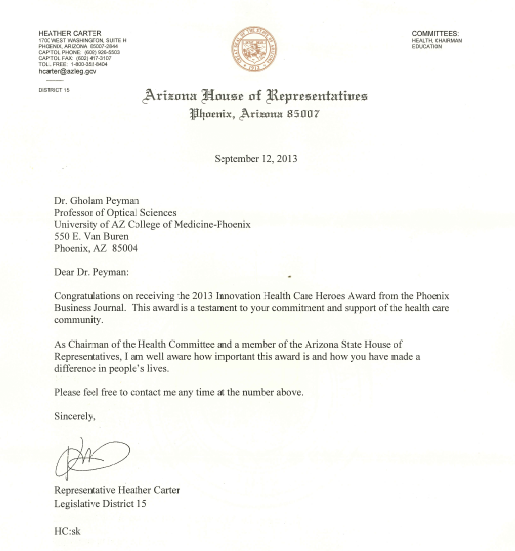 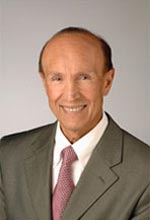 Gholam A. Peyman, MD, a faculty member at the University of Arizona College of Medicine – Phoenix, was named today by President Obama as one of the 12 eminent researcher recipients of the National Medal of Technology and Innovation. Dr. Peyman is also a professor of Optical Sciences and Engineering at the UA.

Eleven extraordinary inventors were also named recipients of the National Medal of Technology and Innovation. This award and the National Medal of Science designations are the highest honors bestowed by the federal government upon scientists, engineers, and inventors. The recipients will receive their awards at a White House ceremony in early 2013.

Dr. Peyman is an ophthalmologist and vitreoretinal surgeon who has more than 135 patents. His most widely-known invention is LASIK eye surgery, a vision correction procedure designed to allow people to see clearly without glasses. Dr. Peyman’s inventions cover a broad range of novel medical devices, intra-ocular drug delivery, surgical techniques, laser and optical instruments, as well as new methods of diagnosis and treatment. He has won numerous honors and awards, including being inducted into the Hall of Fame of Ophthalmology.

“This is a great national honor for the tremendous contribution Dr. Peyman has made to medicine, science and technology” said Dr. Stuart D. Flynn, dean of the UA College of Medicine – Phoenix. “We are so proud of Dr. Peyman, and our faculty and students are grateful for the opportunity to have this amazing physician as part of our College.” In addition to his faculty appointments, Dr. Peyman’s practices at Arizona Retinal Specialists in Sun City West.

Dr Peyman is a member of the editorial board of nine distinguished ophthalmology journals. His awards include the Lifetime Achievement Award of the American Academy of Ophthalmology, the first translational research award from the Association for Research in Vision and Ophthalmology and inclusion in the American Society of Cataract and Refractive Surgery Hall of Fame.

Dr Peyman conducted pioneering studies in intraocular drug delivery and refractive and vitreoretinal surgery. He established the techniques of eye-wall resection and endoresection for intraocular tumors, and was the first to perform a retinochoroidal biopsy and transplant retinal pigment epithelial cells for age-related macular degeneration. He is also a pioneer in laser and photodynamic therapy.

The National Medal of Science was created by statute in 1959 and is administered for the White House by the National Science Foundation. Awarded annually, the Medal recognizes individuals who have made outstanding contributions to science and engineering. A committee of Presidential appointees selects nominees on the basis of their extraordinary knowledge in and contributions to chemistry, engineering, computing, mathematics, or the biological, behavioral/social, and physical sciences.

“I am so honored by this award,” said Dr. Peyman. “What a wonderful surprise. I am gratified that our work has touched so many people. We work always to enhance treatments and improve the outcomes for patients. We continue to look forward since there are many more problems to solve. ”

The National Medal of Technology and Innovation was created by statute in 1980 and is administered for the White House by the U.S. Department of Commerce’s Patent and Trademark Office. The award recognizes those who have made lasting contributions to America’s competitiveness and quality of life and helped strengthen the Nation’s technological workforce. Nominees are selected by a distinguished independent committee representing the private and public sectors.

This year’s recipients are listed below.

National Medal of Technology and Innovation

Affiliations listed are the awardees’ most recently identified employers; some awardees are now retired.